Math Rock …. from Bristol, or, rather, Keynsham, where they began.

Intriguing not easy to pin down

So good to have them back

Bristol three-piece Hoggs Bison’s debut album Aeons brings together tracks from their 2016 EP (Dog Party Call) and single ‘Gold Jersey Top’ for a vinyl album of gently chilled instrumentals meandering between math and post-rock, issuing a polite request rather than a furious demand to be listened to.

Citing touchpoints from Cable through to Three Trapped Tigers the interplay between the clipped beats and a big, bold bass sound is where these influences come through most clearly. But Hoggs Bison has a more laid-back, though still highly controlled, element to their sound than many in this area of music. At no point across the album’s eight tracks is the melody in danger of getting away … 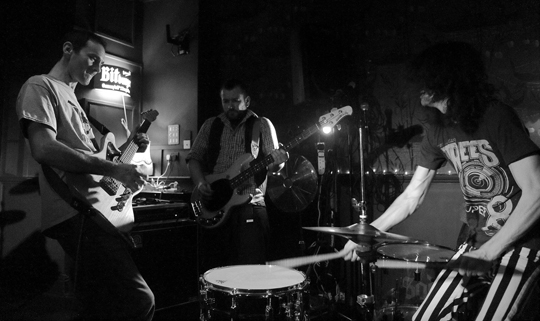